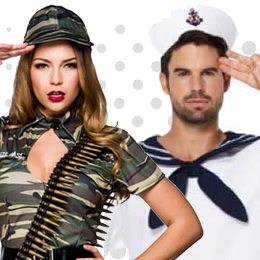 At ease soldier! You’ll find many costumes here from the vintage steampunk looking World War 1 costumes through to sexy female takes on Mavericks Top Gun costume. Also you can get your sea legs here with our selection of sexy sailor outfits and firewoman costumes

Most young boys when asked what they wanted to be when they grew up would have answered with a job that usually involved a uniform. So, ATTENTION, at ease, we have costumes from the early 1920s style Army uniforms to the more modern Top Gun style jumpsuits and also other uniformed costumes including Fireman, Pilot, RAF, Sailor/Naval