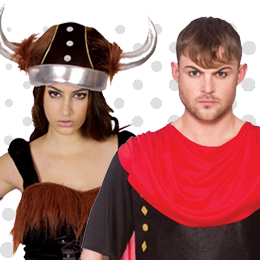 With TV shows Like Spartacus, Games of Thrones and films like 300, Clash of the Titans and Thor, costumes from these eras have become incredibly popular. You’ll find outfits of medieval times and of Roman, Greek, Egyptian and Arabian influence. Costumes include, Spartans, Togas, Centurions, Shieks, Braveheart, Greek/mythical Gods, Gladiator, Knights, Pharoahs and Romans

With the TV rise of programmes like Game of Thrones and Spartacus, and films like 300, Ancient times fancy dress is growing more popular. We have outfits panning from medieval times, mythical Greek times, Egyptian through to the more often used togas and Roman themes