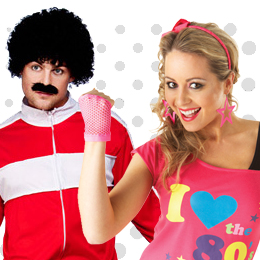 The 80s was an amazing decade for fashion, New Romantic looks juxtapose the outlandish neon rave look of the early 90s and with glam-rock also dominating the 80s and early 90s there are so many looks to attempt from this age that the possibilities are endless! With icons from both decades included here you can complete the looks of Wham, Harry Enfield’s Scousers and rap stars like Flava Flav